If you’re trying to boost your milk supply, why not do it with chocolate?! This recipe is all about increasing milk supply naturally and deliciously! My oatmeal chocolate chip lactation cookies are suitable for both pregnant and breastfeeding mothers – these bite size cookies serve a healthy treat loaded with natural galactagogues; brewer’s yeast, flax seed, and oatmeal (special ingredients that can help you produce more milk). So enjoy snacking and lactating, mama!

In a small mixing bowl stir wheat germ, flax and water, set aside.
In a large mixing bowl, use an electric mixer to cream butter, maple syrup and sugar until smooth. Add the egg and vanilla and beat on high until creamy. Add the flax mixture.
In a medium sized bowl, lightly whisk flour, yeast, baking soda, baking powder, cinnamon, nutmeg, salt.
Sprinkle flour mixture over the butter mixture and mix on medium to low speed. Fold in the oats, cacao nibs/powder, and coconut flakes.
Collect 3 tablespoons of dough and place on a baking sheet lined with baking paper. Flatten the rounds to make a cookie-like shape. Sprinkle with drizzled honey, chopped coconut flakes and chopped almonds (if desired).
Bake cookies at 350°F for 7-10 minutes or until the edges are golden. Transfer cookies to a wire cooling rack.

Adele Cavaliere is a Nutritionist, Published Author, Fitness Trainer, Founder of Nutri-School & Mom of 4! Adele has worked with countless people empowering them to transform their lives, their bodies, and their careers! Adele has worked with celebrities and her success stories have been featured in Cosmopolitan, Shape, Fitness RX and more! Adele is passionate about providing the best health advice for mothers and babies – stay tuned as she completes her second book dedicated to pre and post pregnancy wellness. To learn more about Adele head to, adelecavaliere.com.

From the protein powder, to the seeds and nuts, to the nut butter – these protein-packed energy balls are a perfect treat to get your metabolism fired up!

Have them as an appetizer style breakfast or pop a few in your bag as a great on-the-go snack. With these amazing balls around, you’ll never reach for a Timbit again! 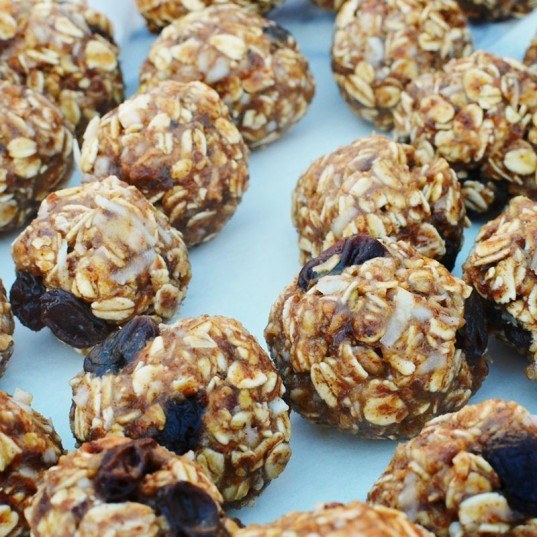 1. In a large bowl mix together the nut butter, protein powder, and matcha green tea powder. Once they are mixed well, fold in the oats, followed by the vanilla, cinnamon, and nutmeg.
2. Next add the remaining ingredients and mix well.
3. Roll the mixture in your hands to form 1-inch balls. If your mixture is too dry, you can add some organic honey to the mix.
4. Once done, place the balls in an airtight container and place them in the fridge to set. Once set, serve and enjoy!

Looking for a way to sneak some extra fiber into your favourite chocolate treat?

Well, look no further than these black bean brownies. Black beans are super-rich in dietary fiber, which helps control rises in blood sugar while keeping you feeling fuller for longer. They are also high in protein and can increase your energy by helping to replenish your iron stores. In fact, one cup of black beans contains 20{f8b3c30a7d782a2db2561023856fa35f4413de809882d9e5eb69c8ab5d10c4a9} of your daily requirements of this important mineral. These brownies are truly a dessert you can feel good about! 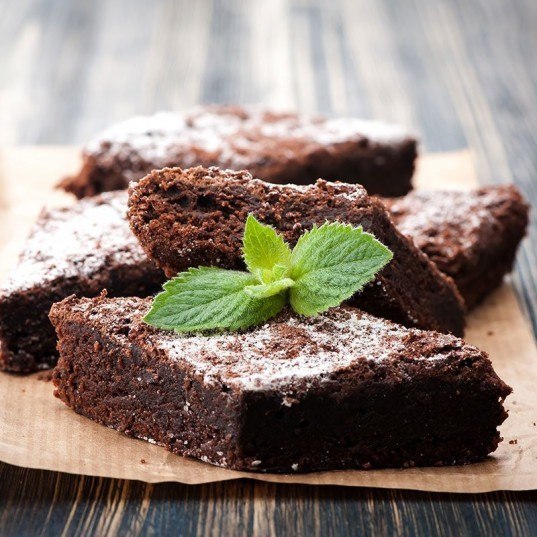 1. Preheat your oven to 350 degrees Fahrenheit. Grease an 8 x 8 inch pan (or use a nonstick baking spray) and set aside.
2. Combine all the ingredients, except the oats, in your Blendtec blender and blend until smooth.
3. Stir in the oats. If too soft, add another ¼ cup of oats or another whole-wheat flour.
4. Pour batter into the pan. Bake for 30 minutes, or until a toothpick inserted in the center comes out clean. Allow to cool before slicing. Serve and enjoy!

This vibrant raw dessert boasts a plethora of health benefits

Blueberries help lower cholesterol while also fighting the dreaded abdominal fat; ginger has strong thermogenic properties that boost your metabolism, and creamy avocados give you a dose of heart-healthy omega-3s! This nutrient pudding dessert is not your childhood pudding cup! So blend up a batch, grab a spoon, and dig into a fresh and fruity treat that your body will love. 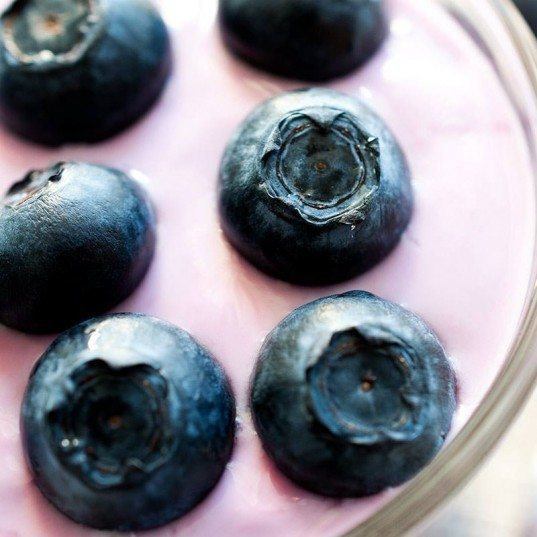 1. Combine all ingredients in a Blendtec blender and blend until mixture is smooth and creamy.
2. Serve immediately as frozen blueberries will thaw and change the consistency of the pudding.

Looking for something that tastes like your favorite holiday dessert but offers up an abundance of vitamins and minerals instead of expanding your waistline? 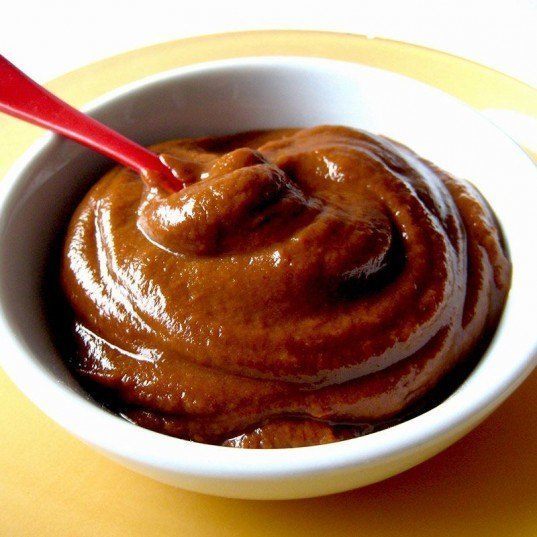 1. Blend the first 6 ingredients in your Blendtec blender until smooth, but keeping a thick consistency.
2. Spoon the mixture into a bowl and sprinkle with walnuts. Yum yum!

Pies are a classic dessert. But what if you had a pie that was not only good for you but could also go anywhere?

Well, here you go! These pies will work for any occasion, including special holidays or just fast paced workdays. This scrumptious treat will provide you with nutrients your body needs, and satisfy any sweet tooth, no matter what the day requires of you! 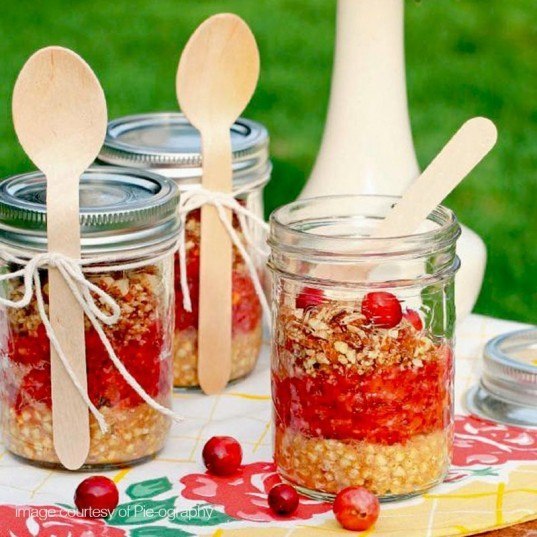 Prep Work
Put 1 cup of raw untoasted buckwheat in filtered water for 20-30 minutes. Rinse well and drain, then pat with a paper towel and set to the side.
Ingredients make about 6 servings
2 cups of raw organic cherries (save a few for garnishing)
1 organic pear, not too ripe
¼ wedge of an organic orange, with the skin on
Juice from ½ an orange
1 cup of soaked raw untoasted buckwheat
8 dates
½ cup of raw organic almonds
½ cup of raw organic pecans
1 ½ tsp. of cinnamon
⅛ tsp. of ground cloves
⅛ tsp. of allspice
2 Tbsp. of maple syrup
1 tsp. of vanilla

Special Equipment
6 mason jars (many sizes and styles are available, but I prefer 8 ounce jars

1. In a bowl combine the soaked buckwheat with ¼ teaspoon of cinnamon, juice of ½ an orange, 2 Tbsp. of maple syrup, and ½ tsp. of vanilla. Set this mixture aside.
2. Using a Blendtec blender, blend the cherries, pear, ¼ orange piece with skin on, 6 dates, 1 tsp. of cinnamon, ⅛ tsp. of allspice, ⅛ tsp. of ground cloves, and ½ tsp. of vanilla. Blend until you have the texture of a puree, then set aside and rinse the blender. This is your filling.
3. For your pie topping, put the almonds, pecans, 2 dates, and ¼ tsp. of cinnamon in the blender and pulse until you get the texture of a crumbly meal.
4. Start layering by filling the mason jars with a hefty portion of the buckwheat mixture, then 2 scoops of the of the cherry mixture, then top it off with nut crumbles and add a cherry or two! Place the lids on the jars until ready to serve. You can even tie a small spoon to the side of the jar with butcher string for later.

** This recipe was provided by http://www.alkalinesisters.com

This is a fabulous dessert that is great for satisfying that sweet tooth without wrecking your body with tons of processed fat and sugar. Plus, since it this dessert is raw your body will have an easier time digesting it while easily absorbing all the wonderful nutrients! So go ahead – have a slice (or two)! 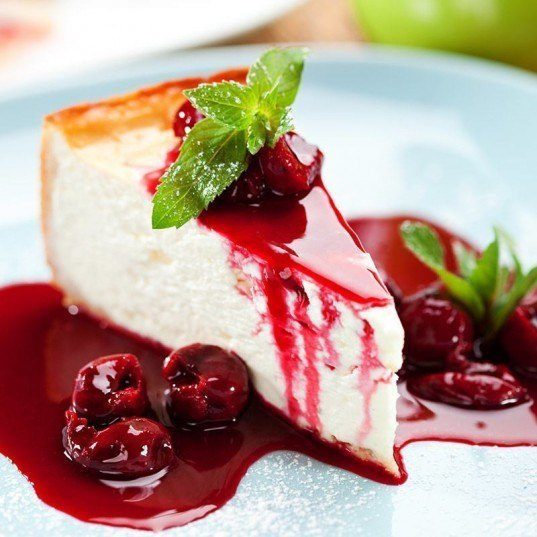 Prep Work
Put the 2 cups of raw cashews in a bowl and cover with an inch of water. Add in ½ tsp of sea salt and let soak for a minimum of 12 hours, uncovered. After soaking, use a strainer to rinse the cashews in cold water.

1. To make the crust, blend the almond meal and dates together until the combined mixture sticks. Push the mixture into a greased 6-8 inch glass pie dish.
2. Using your Blendtec blender, blend the cashews, lemon juice, maple syrup, and vanilla until the texture is completely smooth. Scoop this mixture (which is your filling) on top of the crust. Place the pie in the freezer for a minimum of an hour.

We know truffles are delicious, but did you know they can also be healthy?

This truffle recipe, packed with yummy cashews, is perfect when you’re looking for a petite dessert that packs a protein punch. Plus, they’re also raw so you get even more health benefits such as increased energy and easy digestion. Delicious AND nutritious? Sign us up! 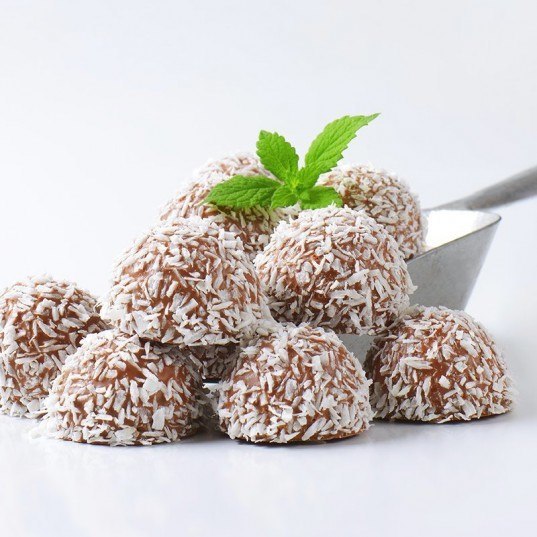 1. Place all ingredients except the oil into your Blendtec blender.
2. Melt the coconut oil in a glass measuring cup set in hot water for about 4-5 minutes.
3. Add to the blender and mix until combined. The mixture may clump up.
4. Scrape the mixture into a bowl and chill in the refrigerator for 45 minutes to an hour.
5. Once chilled, scoop heaping teaspoons and roll into balls, placing them on a tray as you go. When done, refrigerate again for 15 minutes.
6. Finally, roll the truffles in the dried coconut and enjoy!

Ah, the mighty chia seed. Not only are chia seeds gluten free, but these tiny superfoods are an amazing source of protein (boasting all 8 essential amino acids!), omega-3 fats, calcium, and iron.
They also have a balancing effect on blood glucose levels, which makes them great for weight-loss. Ready to add them to your menu plan? This sweet and savory pudding is the perfect way to enjoy all their awesome benefits!

Directions
1. Pour the water into a large bowl and add tahini and chia seeds. Stir until well combined and let sit for about 10 minutes.
2. Mix in your coconut flakes, blueberries, and hazelnut spread (if using) just before serving. Serve and enjoy!